What Have We Been Up To? 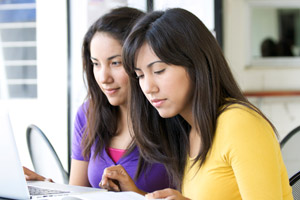 Below are a few sneak peaks at what we have been working on in the lab!

Your time and effort over the years have helped progress and enhance our research!

Math Performance Around the World

Results from this study suggest that even in adolescence, the strategies that students use to solve simple addition problems are an important indicator of the way they are thinking about math in general. Of particular concern, adolescents who are still relying on counting to solve simple addition problems may also be struggling with broader math achievement in other areas like geometry, fractions, or algebra. Helping students with this strategy profile to move beyond counting by practicing math facts may be an importation direction for intervention.

Data were collected from a same-sex twin sample at ages 12 and 15 (N = 150 pairs) as part of the Western Reserve Reading and Math Project. Participants were asked to identify where on a number line a series of numbers should be located. Researchers analyzed the responses to determine if the way in which accuracy on the task was described (i.e., difference between the correct answer and the answer given or closeness to a predicted pattern of responding) at age 12 changed how well they could predict performance on mathematical achievement measures at age 15. The results of this study suggest that while most adolescents are able to accurately associate number with space (assign a number to the correct place on a number line), some adolescents have not fully developed this skill. The variation in performance on this task was predictive of later performance on mathematical achievement tasks, from solving basic arithmetic to more advanced problems regardless of how accuracy was described.